Passmores' community get on their bikes for Sustrans Big Pedal Challenge 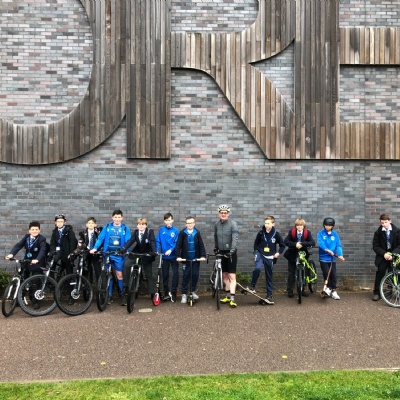 Our Year 7’s and 8’s have taken part in a national event, Sustrans Big Pedal, which is an initiative aimed at making journeys to and from school more active.

Sustrans’ goal is to make journeys without transport such as cars and busses easier, and therefore more environmentally friendly.

For two weeks, we recorded how many students cycled, scootered, walked or came by wheelchair.  A huge 3,500 journeys to and from school were clocked during that time (and at home if they could not travel to school by one of the methods above). This was 68.44% of all the journeys made  -  just over two thirds in Year 7 and 8.  Amazing!  Passmores came 16th out of all the schools who were involved nationally.

The total includes journeys by supporters – parents, carers and some form tutors joined in too. Supporter journeys counted for slightly less than 4% of the total.

Not all the form groups in Year 7 and 8 have the same number of students in each group, but the forms who racked up the most journeys were as follows:-

Vice-principal, Mr Chadwick, a keen cyclist himself, said: ‘This initiative has helped to reduce emissions in Harlow as well as contributing to the Sustrans charity.  We also raised money for this charity with a non-uniform day, raising £250. This will go towards making journeys in urban areas more sustainable.’