An Inspector Calls at Passmores.... 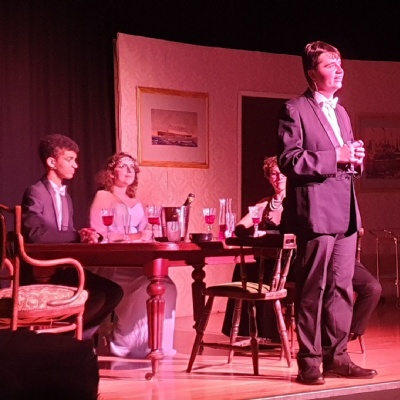 Our students delivered a gripping performance of J.B. Priestley's classic thriller, An Inspector Calls in the latest of our school’s illustrious productions.

Directed and produced by the English Department, the show was four months in the making and featured a dedicated young cast and crew from Years 9, 10 and 11. The play was performed to all Key Stage 4 students, as well as staff, governors and parents at a series of shows scheduled throughout one week.

The live performance was a valuable opportunity for students to gain a deeper understanding of the play in preparation for their GCSE Literature exams, which are taken towards the end of Year 11. An Inspector Calls is the third play in the set studied at Key Stage 4 and follows on from the successful school productions of Macbeth in 2018 and The Strange Case of Doctor Jekyll and Mr Hyde in 2019.

Co-principal, Natalie Christie said: ‘The bravery of the students involved, to perform in front of over  600  of  their  peers,  should  not  be underestimated.  Feedback has been incredibly positive, with staff and governors commenting on the maturity of the students and the clarity of the performance.’